HanseMUN sends not only delegations to MUN conferences but also enables single delegates to participate in certain conferences. Marlene Ostrop participated in OxiMUN this November. Here’s what she tells about her Oxford-experience:

„My fellow delegates – OxiMUN 2015 was a blast!
This conference was the third experience in my MUN-career – each of them unique.

For the three days from the 13th until the 15th November I had the honour to be the representative of the Republic of Sudan in the United Nations High Commissioner for Refugees (UNHCR) within the sessions as well as throughout the socials.

After constructive but also quite intense debates about viable solutions for the Migrants in the Mediterranean Sea we, my 35 fellow delegates and our three honourable chairs, ended up on the third day of session with voting on the three draft resolutions which were on the floor by then and consequently passed with only just a majority the final resolution paper.

Having every time only one and a half hours to get ready after session, we had three fun evenings of socializing: an elegant welcome night at the Ashmolean Museum, a fancy dinner at Exeter College and dance-night-outs in two clubs in the vibrant Oxford-night-life. 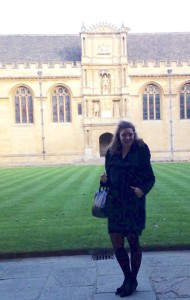 Now I’m keeping in mind those unforgettable memories “such as but not limited to” eating our hot pizza in the pouring rain in crowdie Oxford due to our short lunch breaks trying not to be late for sessions as well as all the times when my fellow Venezuelan delegate got up never forgetting to say: “The Bolivarian Republic of Venezuela thinks that…” and the at least three times when my Russian delegate quoted: “United we stand – divided we fall”.

The more MUN-conferences I attend – the more I want to be part of further ones. This was my first time as a single delegate and I would definitely go by myself again if there won’t be a delegation to go with. Like in my first two conferences I met wonderful people from all over the world and hope to see many of them in future MUN-conferences such as coming up WorldMUN 2016 which I’m already very much looking forward to!!“